NP-View uses reports to present network information related to the open workspace.  These reports are available to all users and can be accessed from the main menu. All of the reports are continuous scroll and can be searched by table or column. Searches can be combined between the table and columns.

Viewing Note:  The reports are displayed with alternate rows shaded in a light gray.  Also, in some columns (e.g., Risks) we also use a light gray text.  We have noticed that some custom calibrations will turn these colors to white.  If the gradient rows or text colors are not displaying on your screen try calibrating your monitor to the default settings to make them visible.

Access rule tagging
Access rules are uniquely tagged (Object ID) within NP-View for linkage to comments and risks.  The tag is created using a hash of the below data fields.  If any of the data in these fields changes, the tag will change and previously linked comments and risks will no longer be associated with this rule.

The hash is calculated based on a combination of the following data fields.  Available data varies based on manufacturer so, some fields may not apply to specific manufacturers.  Most of the below fields are defined above. For the fields unique to the hash, they are documented below.

Access rule metadata synchronization (Enterprise Only)
In the Enterprise edition, additional metadata fields can be created for the Access rules report.  The metadata will automatically synchronize across Palo Alto devices and workspaces where the same access rule UUID appears. 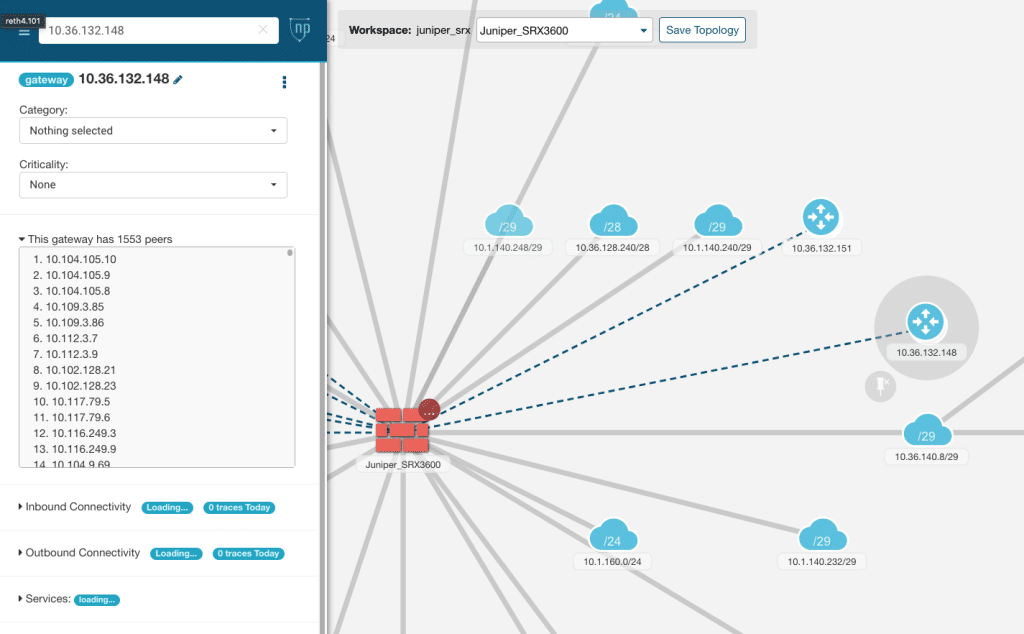 Object group tagging
Object groups are uniquely tagged (Object ID) within NP-View for linkage to comments.  The tag is created using a hash of the below data fields.  If any of the data in these fields changes, the tag will change and previously linked comments and metadata will no longer be associated with this object.

The hash is calculated based on a combination of the following data fields.  Available data varies based on manufacturer so, some fields may not apply to specific manufacturers.  Most of the below fields are defined above. For the fields unique to the hash, they are documented below.

For new risks or warnings, the expectation is that the user will review each item, determine if the issue needs to be addressed and they can manually change the action status accordingly.

Upon subsequent network updates, the system will adjust the status if required. For example:

Access Rules and Object Groups have a Compare function to show historical differences in data that has been added or removed. The function can be engaged by clicking the “Compare” button located at the top of the page. This function is used to display changes over a period of days.

The user can select a time frame (7, 30, 90 or 356 days or a custom date range). The user can select one or more devices to include in the report and then show the history over the range. Once the parameters are selected, the “Show Comparison” button should be selected.

Clicking the “Compare” button will revert to the normal table but will not clear the selections.

Clicking the “Reset” button will clear the selections and reset the table.

NP-View reports use highlighting to help the user quickly identify important information.  The highlighting is controlled by the Table Highlight tab under the Policy manager function.

The table reports can be personalized by each user.  Individual columns can be sorted ascending or descending as well as pinned to the left or right which will fix the column during scrolling. The report can also be personalized by adding or removing columns. By clicking the hamburger menu in the upper right, a list of columns will be displayed. The user can enable and disable specific columns for viewing.  After selection is final, click the save button to retain the settings. Displayed columns can also be personalized.  The user can change the column size (drag between columns) and order of the columns (drag from header). The updated configuration will apply to all reports of the same type across workspaces by user when the save button in the upper right is selected.

Note:  Select reports have data export and import capabilities.  Details on these features can be found here.

The system logs features shows a detailed sequence of tasks attempted and completed.  This log is primarily used for system debugging and contains information, errors and warnings derived during system operation.  The system log feature has three views, Workspace, User, and System.  The System view is accessible only by the Administrator and shows the overall operation of system across users and workspaces.  The workspace and user views are available to the Administrator and Workspace Admin.  The user view shows the actions taken by the current user on the open workspace.   The Workspace view shows system actions for the open workspace.  The views can be filtered to show only information, errors, warnings or all.  Errors are generated when a system operation fails to complete.  Warnings are generated during data parsing and when policy / requirement infractions are identified.

The background task functions shows the status of each task spawned by a data import, merge, analysis or running policy. A parsing task indicates the imported file is being normalized and hosts inferred.  Merge tasks combine the blueprints into the topology map. Analysis defines all of the paths and open ports.  Policies review the active requirements to identify potential risks for review or to provide cell / text highlighting for reports.

The report displays the task name, its progress, the workspace the task is running, the user who owns the task and the time it started or ended.  The check box allows the user to filter on the tasks pertinent to the current workspace.  The X allows the user to cancel a task that may be running too long or be stuck for some reason.

The user can also cancel all tasks within a workspace using the “Cancel All for this Workspace” button.

Tip: Click on the active spinner on the topology map to invoke the Background Task report.

As modifications are made to the network and the updated configuration files are imported, the NP-View automatically detects the changes and logs them in the Change Tracking table. For each change, the timestamp, action, device, and description are recorded.

The actions recorded are as follows:

File import – for each file uploaded, of the following statuses will be displayed

Topology map – for each file uploaded, of the following statuses will be displayed for the topology map

Connectivity Paths – for each file uploaded, of the following statuses will be displayed for the workspace

Changes are displayed by calendar day. At the top of the table is a drop down that allows the user to select which day to review. The default is the current day.

The change tracking table can be searched, sorted by any column, switched to a list view, exported, and configured with alternate columns if required. These functions are available in the upper right corner of the table.

This report provides a summary of network paths and their analysis results:

The IP groups are highlighted with light colors to allow for quick scanning of the table.

This interactive report provides a network path comparison between two points in time. When a configuration file is added to the system and is different from the previously imported file, a new “Version” is created.  The user can select two versions to compare.  The resulting table will display the changes between the two files. Removals in the left column and adds in the right column.

In addition to the standard columns that track data from your configuration files such as device, source, and destination, NP-View includes custom metadata columns that allow users to input their own data directly into the table

The Access Rules and Object Groups tables include these additional metadata fields to support NERC-CIP reporting, they are indicated as such by a light blue header.

Currently, the provided custom metadata fields are fixed, cannot be moved, renamed, or reordered (but can be hidden) and contain the following fields:

*The import system has been designed to treat all fields as text and not attempt to execute any fields that resemble text.

Custom metadata fields can be used in conjunction with conditional formatting in the policy manager to highlight the text or cells based on text match.  See Policy Manager

In the Access Rules table, Source, Destination and Service groups can be expanded to see the group details.  By clicking on the + icon within a cell, the expanded group information can be made visible. 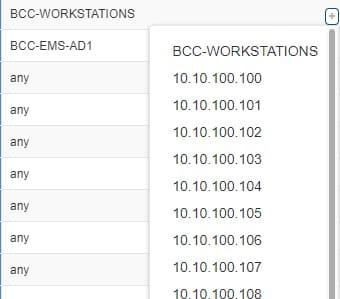